The U.S. Naval Academy campus is known for its awe-inspiring Beaux-Arts architecture. Born of the École des Beaux-Arts in Paris, this style was popular from the 1830s through the late 19th century. From 1901-1907, architect Ernest Flagg adopted it for his “new academy.” He created the original Naval Academy architecture in the Beaux-Arts treatment with incredible attention to detail, still seen today in the design flourishes that grace buildings like Bancroft Hall, Mahan Hall, and more.

What Makes It Beaux-Arts?

Signature embellishments characterize this school of design. Since Flagg used so many of them for the Academy, they can be easily spotted. Beaux-Arts is a combination of old and new, relying on classic lines but often using modern materials like metal and glass.

Elements like steep mansard roofs, rusticated and raised first stories, arched windows, and doors that are both arched and pedimented are some of the hallmarks of this style. You’ll also see symmetry throughout, and a specific order of spaces that brings people in from grand, formal “noble spaces” to everyday living areas. Beaux-Arts also features sculptures, murals, and other art, along with classical architectural details like colonnades.

Flagg studied the former dormitories on the Yard, finding them to be cramped, drafty, and unsafe—not befitting a military academy. He infused drama into the overscaled elements and proportions to capture the glory of this grand institution, elevating the spaces to reflect the elite military academy’s ideals. The result is the absolutely breathtaking buildings that create the campus.

Take a historical “walk” through the incredible spaces that are the Beaux-Arts Bancroft and Mahan Halls. This tour might just inspire you to come see us in person, but for now, relax and enjoy the tour!

The Beauty of Bancroft Hall

One of the quintessential representations of the Beaux-Arts era, and a stunning building by any measurement, Bancroft Hall anchors the quadrangle (as well as life at USNA). Noteworthy for its architecture, its sheer size boggles the mind, too. As one of the largest dorms in the world, “Mother B” covers over 33 acres of floor space, five stories, and 4.8 miles of corridors. With 1,700 dorm rooms outfitted for 4,400 midshipmen, it also includes dry cleaning facilities, a mess hall, and the many services midshipmen need to live, eat, and accomplish their daily tasks. It’s a small city in its own right. Yes, it has its own post office—and even its own ZIP code.

Facing this large building, you’ll notice the sublime symmetry of its granite exterior. A Beaux-Arts Mansard roof caps the top and dormer windows peek out. Doorways are ornate and dramatic, many featuring sculptures and cornices. Upon entry, you’re greeted by an expansive horseshoe staircase that could conceivably fit battalions of marching men. Capped by the Rotunda, this stunning dome is filled with detailed plasterwork reminiscent of the stars and a center window to the heavens. Ascend the stairs to Memorial Hall to view soaring barrel ceilings and an enormous skylight. Immerse yourself in these trademark design elements of the style.

The evolution of Bancroft Hall is as fascinating as the inspirational design. Bancroft Hall consists of eight wings. The original two wings were completed in 1906 and are now called the 3rd and 4th wings. The third was built over the spot where the old Fort Severn had been. In 1917, the next pair, the 1st and 2nd wings, were added. In 1939, another set was built to accommodate the growing school, the 5th and 6th wings. Finally, in 1961, the 7th and 8th wings completed the building as we know it today.

While numerous updates and renovations to Bancroft Hall occurred throughout the years, the timeless and extraordinary Beaux-Arts designs have been preserved in all their glory. 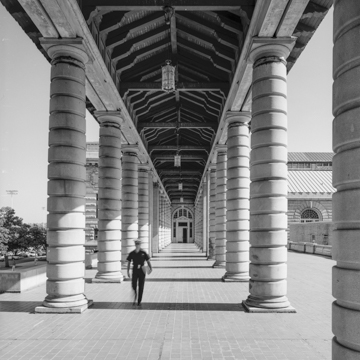 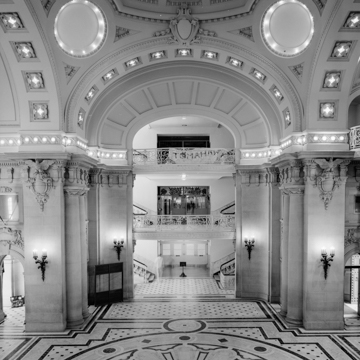 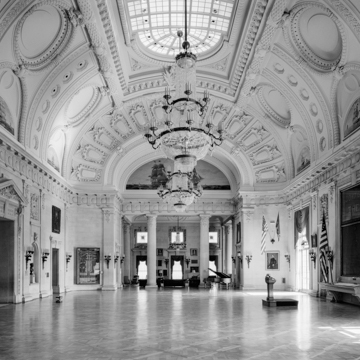 The Magnificence of Mahan Hall

The central piece of the trio, including Maury and Sampson Halls, the Beaux-Arts style signifies Mahan Hall. Flagg designed this trio as the original academic buildings. Mahan Hall, originally slated to be built in granite, includes bricks to offset rising construction and labor costs while attempting to meet the needs of a growing academy. True to its Beaux-Arts roots, the building is laid out with a vertical symmetry, hosting double Palladian columns framing the arched windows on a three-tiered facade. The administrators nixed the original plans to have six admirals standing watch atop the columns due to budget cuts. However, the front of Mahan Hall remains notable for several reasons. Flagg was able to add more features, including the two sconces framing the entrance that are meant to recall a Roman warship when viewed from the side. Sculptural dolphins also deepen the historic navy motif and leaves symbolizing long life and immortality adorn the facade.

From its inception in 1907 until the Academy’s needs for it changed, Mahan Hall was the library for the midshipmen. Its dramatic entrance pulls you in with a vaulted barrel ceiling leading to a soaring two flight staircase dotted with sunlit domes. From there, you ascend to the Hart room, once the lush and gorgeously appointed reading room. Today, Mahan Hall is home to the talented theater group, the USNA Masqueraders. The Beaux-Arts beauty still captivates and, like the theater group, transports all who enter, all these years later.

Flagg designed Naval Academy buildings like Mahan Hall and Bancroft Hall both to handle the massive traffic of a military academy and also to imbue those who see the buildings with a sense of history and reverence for those serving before them. These buildings elicit pure awe, from the first time you see them until you actually experience their spaces. To truly enjoy these treasures, you need to feel their hallowed air. With so many wonderful tours, you can book yours here and dive even deeper into the tremendous history of these buildings. Come experience the Beaux-Arts beauty for yourself!