EAST RUTHERFORD, N.J. — Diego Fagot wasn’t done. Not yet. Not after leading all Navy players with nine tackles. Not after fooling everyone — even himself — by running for a first down on a fake punt that wasn’t. Not after closing his playing career by “singing second” for the second time against Army, something a generation of Midshipmen players before him had made an annual rite of passage until recently.

No, Fagot had to let loose. Because at this point, why the heck not?

“It kind of goes back to that culture piece,” the linebacker said, wrapping up his postgame interview. “We’ve faced a lot of adversity this year and guys keep consistently coming back and battling and not giving up. And so especially in the second half, regardless of the score, we’re going to keep playing as hard as we can, and we pride ourselves on that. I can’t say enough about they think they’re ‘the last of the hard,’ but that’s just not the case.

And with that, order was officially restored in America’s Game, at least to hear the winning side tell it. Navy upset Army 17-13 to cap a season that was going to end here either way, as the program finishes the 2021 season at just 4-8. In the minds of the Midshipmen, though, the Black Knights — who are amid their fifth season of eight wins or more across the last six years — got their comeuppance. 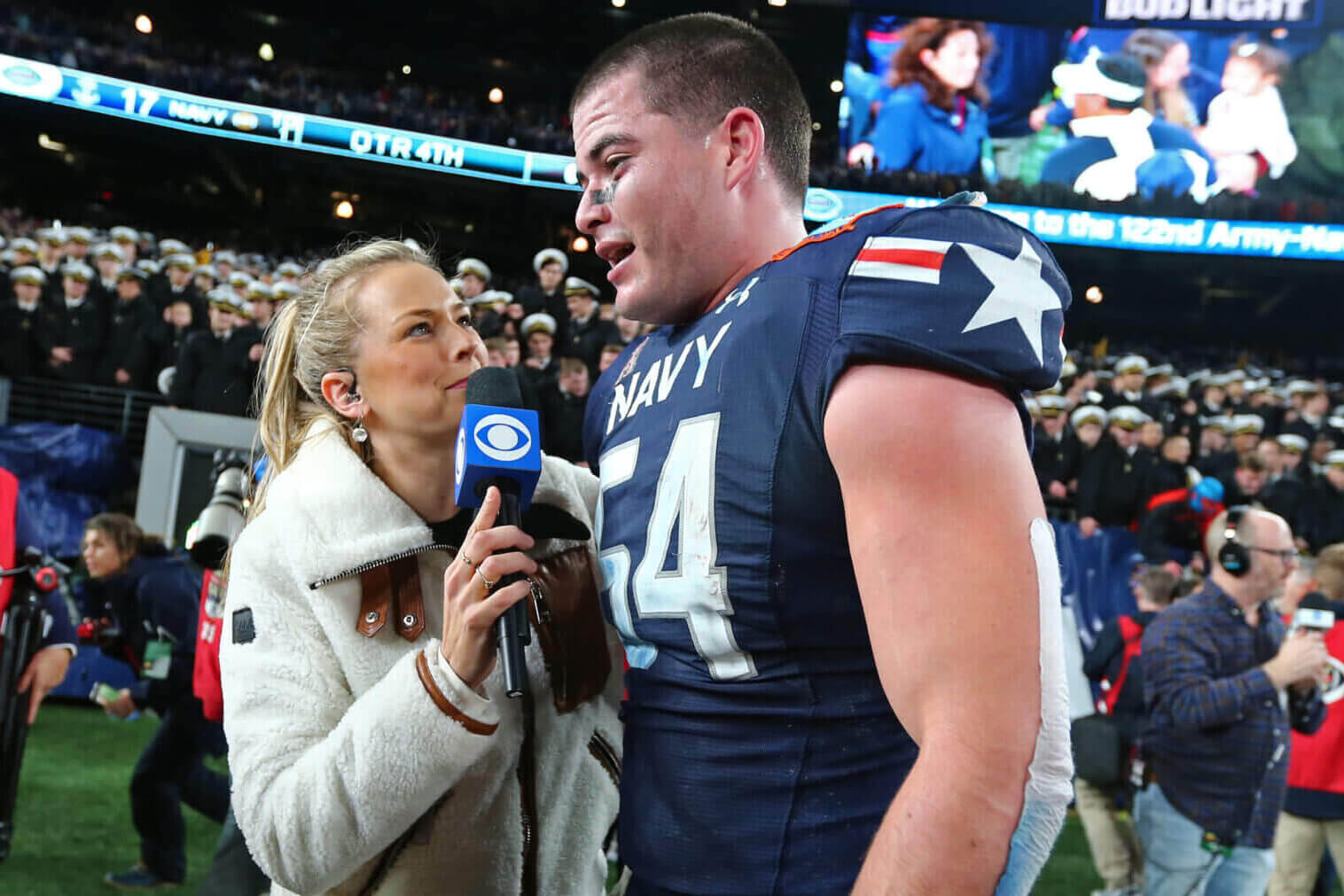 Navy had won this game 14 years in a row until coach Jeff Monken got things rolling up at West Point, leading Army to four wins in its last five outings against Navy entering Saturday. The Black Knights have a date with Missouri in the Armed Forces Bowl in 11 days. The Midshipmen do not.

Not that any of that mattered on a mid-December day that reminded us all of why we love this game. With gale-force winds threatening all afternoon, and with rain coming and going, the football gods could not have drawn up more appropriate elements at MetLife Stadium for America’s Game.

Or a more appropriate dagger from the victors afterward.

“One of their things is they say that they’re ‘the last of the hard,’ and quite frankly, we took that to heart,” Fagot said. “And they think their culture is better than ours. And you can clearly see how — they scored on the opening drive and they thought it was going keep going their way throughout the whole entire game. But I mean, we’re not going to like lay down for them, and so I think we were just consistently coming back, coming back, coming back up and it ended up in our favor.

“So I don’t really know if they’re really ‘the last of the hard.’”

Oh, this was the good stuff.

There was Fagot jabbing in the interview room and there was his head coach, Ken Niumatalolo, crying on the field in the moments after the game went final.

There was a fourth-down measurement that officially decided this game — because of course there was — and there was a bold call that left everyone confused and may have decided the contest.

Navy lined up to punt from its 34-yard line with 13:32 left in the fourth quarter, nursing a one-point lead and needing 1 yard to go for the first down. Fagot, standing back and to the left of the long snapper, noticed Army overloading on the right, threatening to block the kick. So he verbally checked to a different protection. Except amid a crowd of 82,282 fans, long snapper Ethan Nguyen heard him signal for a fake.

So Nguyen snapped a dart that Fagot somehow corralled. He shed an Army defensive back who happened to be right there, and then, presumably as confused as everyone else on the field, decided to hurdle another DB for good measure, ending up with 4 yards and the first down.

Just one problem: No one knew what exactly had happened. Fagot’s and Niumatalolo’s real-time reactions, caught by CBS cameras, should have been giveaways, as was the way Fagot reacted to the snap coming his way.

Three Navy offensive players looked at each other and laughed when asked in the postgame interview room whether they realized what was going on.

“They were mad,” Nguyen, the snapper, said of the coaches’ initial reactions. “But as soon as we got past the 50, they were all like — the momentum changed, and I just really believe we got six more minutes at least off that possession.”

Navy ran 12 more plays on that drive. It kicked a field goal to extend its lead to four. By the time Army got the ball back, just 6:10 remained on the clock.

Niumatalolo, the 15th-year head coach, joked that sometimes it’s good to be lucky. He talked a lot about how tough Navy’s schedule had been this year, and how they played two top-five teams. Fagot, forever blunt, said the ball simply had not bounced his team’s way all year, until it finally did.

“We were just going to come out swinging,” Niumatalolo said. “We’ve been hearing a lot of stuff, that the tables have turned and that they’re on top. We have never felt that. I just never felt that way.”

Navy fell behind 7-0 four plays in. It gave up just six points and 157 yards the rest of the way.

The Midshipmen held Army to a season-low 232 total yards. They shut the Black Knights out in the second half. 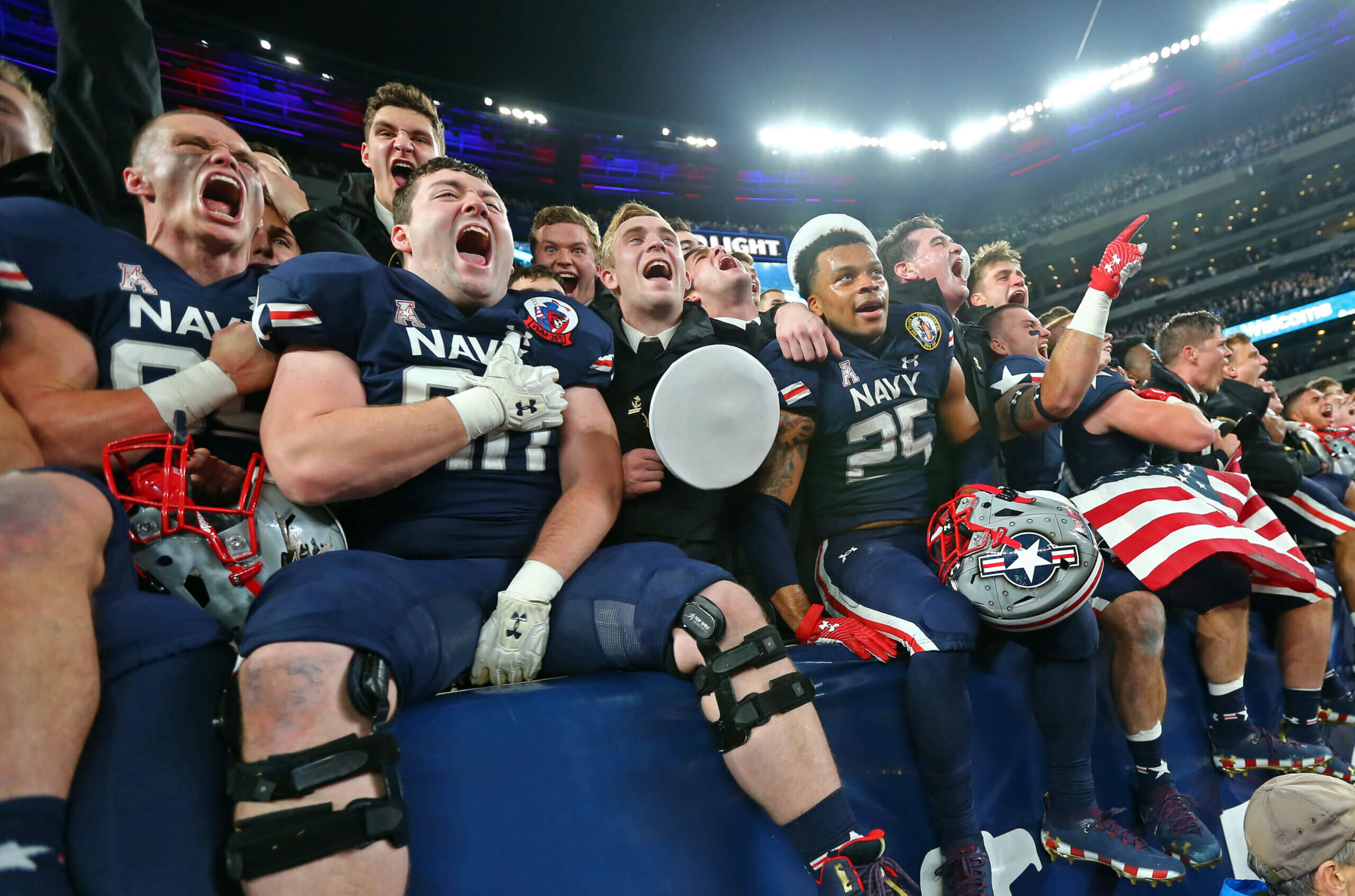 The Midshipmen celebrate their 17-13 victory against the Black Knights by singing second and belting out “Navy Blue and Gold” after the 122nd Army-Navy game Saturday in East Rutherford, N.J. (Danny Wild / USA Today)

All three FBS academies — Army, Navy and Air Force — claimed a share of the coveted Commander-in-Chief’s Trophy, the first time that has happened since 1993.

But none of it compared to the basic nature of the here and now — to the joy of stopping Army a yard short on fourth-and-5 with 1:31 left, of racing to the northwest corner of the end zone to sing “Navy Blue and Gold” after the losing team sang first, of teammates Tyger Goslin and Michael Salisbury tackling each other mercilessly near the end zone after the final horn, unable to control their emotions as they basked in the culmination of a year’s worth of physical and mental preparation.

None of it compared to the most fundamental of football and life principles: of making a stand.

“You just want it so bad for them,” Niumtalolo said. “Yeah, it started off rocky, but to end this way, it doesn’t get better than this. This is what everything in our program’s about: To beat those guys. In football. After this, we’ll serve together.

“But on this day, we had one goal, and that was to crush Army.”

And, in perhaps the most fitting tradition of all, to remind their rivals about it for as long as humanly possible.

(Top photo of Diego Fagot and Isaiah Morris: Adam Hunger / Associated Press)What did you think of this story?

Matt Fortuna covers national college football for The Athletic. He previously covered Notre Dame and the ACC for ESPN.com and was the 2019 president of the Football Writers Association of America. Follow Matt on Twitter @Matt_Fortuna.